It’s the end of August and that means that it’s time for my August resolutions update! 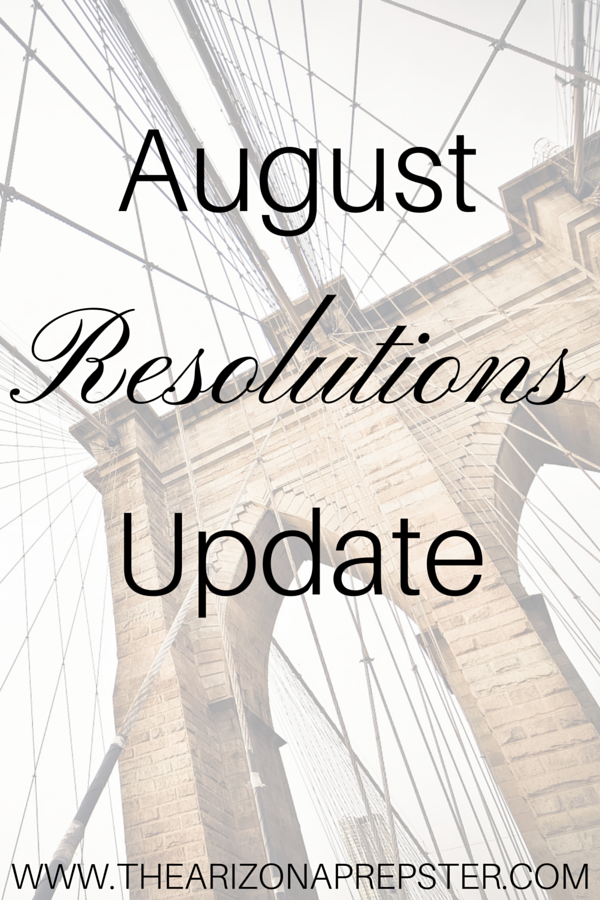 One  Fall 2015 Dean’s List: So, it’s official! I got the email saying that I was put on the Spring 2015 Dean’s List earlier this month! I decided to change this to Fall 2015 because I clearly didn’t think it through that I would be taking two semesters in 2015 {hello, Earth to Lauren?}.

Two  Clean and Organize: I was doing very well up until last week. Last Sunday I was in the ER and the rest of the week I was recovering and resting {and going to school} while Matt was still working. Thus, many things fell to the wayside and I have to catch back up on them.

Four Get Healthy: We did very well this month on eating well. We rarely ate fast food and I drank a good amount of water. However, I did pick back up on drinking soda so I didn’t do the greatest. Food-wise I did very well, so you win some you lose some.

Five  Be Happy: This month has been pretty rough, I’m not going to lie. I really haven’t been that happy, I’ve been pretty down. I don’t really know why, sometimes this just happens for a bit and then passes but it hasn’t really passed. We’ll see, maybe next month will be better.

Also, I would like to announce that I am going to be joining the #SeptemberScopers Scope A Day Challenge!! It’s a 30-day challenge to Periscope every day! Quickly, Periscope is a broadcasting app that allows you to broadcast yourself to your followers {like a television show-ish. Or a live YouTube video}. It is live and the replay saves for 24 hours! You can find me by searching {TheAZPrepster}! I have never “scoped” before so I’m very excited to do this challenge!

I hope you follow me and others {by searching #SeptemberScopers} through our challenge! Also, if you have Periscope, you are welcome to join as well!

How have you been doing with your resolutions?

Happy Thursday! I’m going to show you some of the crafts that I’ve found around Pinterest this week! One Dry…

Happy hump day! It’s time for another edition of What We Love Wednesday! Today’s item is the Monogrammed New England…

Hey there! It’s already the beginning of October and that means that it’s time for another blog traffic report! Every…

Happy New Year’s Eve!!! I cannot believe that it is already the end of 2015, this year just flew by!…

Happy Friday I hope y’all had a fabulous week! It’s time to wrap up the week with my Friday Favorites!…