It’s a new month and that means that it is time to review the traffic that Creatively Lauren has received over the past month! This month was more about me and having some time to myself. Matt and I took a week vacation this month and it was so awesome, but then worked pulled me straight back to reality this past weekend. It’s crazy how things can change like that. Anyway, let’s get into this month’s traffic report! 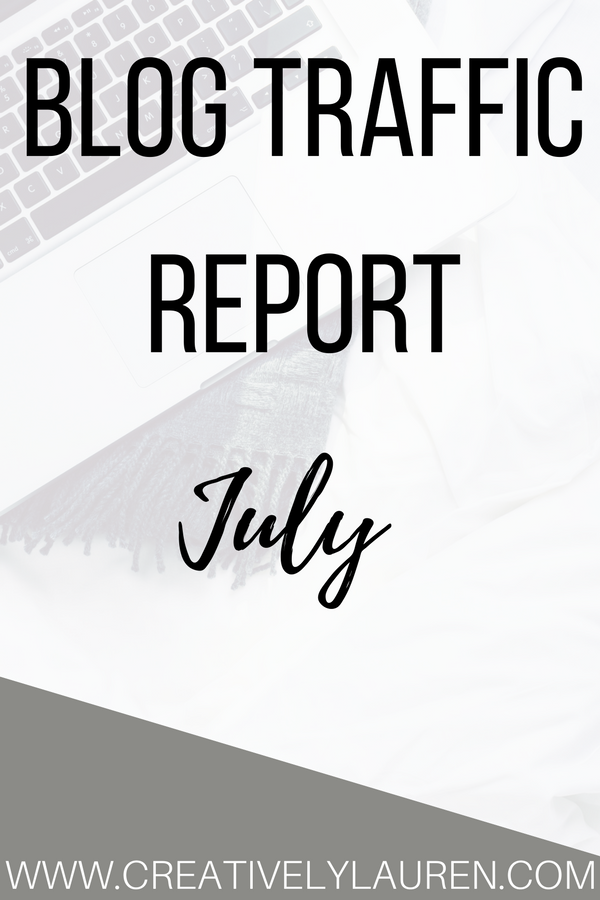 So this month, I did pretty well for being on vacation and only posting five posts for the month. I’m not too happy with the amount of posts for the month, but to be honest, I have been struggling to come up with post ideas for awhile. I think because I’ve been working on some other things at the moment that I have just been having a hard time. If you have any tips on getting out of that kind of rut, just let me know! So, here are my Google Analytics stats for the month of July!

This month I had 2,155 pageviews, just a couple hundred more than last month. I had 1,292 users create  1,422 sessions, with a 78.27% bounce rate. Although it is only roughly 3% lower than last month, I think it is the lowest bounce rate that I’ve had since I started doing these monthly traffic reports {which is pretty awesome}.

I definitely picked it back up with my Twitter in terms of getting my tweets seen. I had 162,600 impressions for my tweets, which is the most I’ve had since I started keeping track in March. I ended the month with 782 followers, which is an increase in 48 followers from June. This month I decided to change up how I schedule things. Since I am still on the free Buffer plan, I can only do ten posts at a time. {Speaking of Buffer, they just added Instagram to the list of social channels you can use!!!} So, I decided to use my ten Buffer posts for my blog posts only. So instead of publishing using Buffer every half an hour, and using mixed content, I share my own posts only through Buffer every hour, on the half-hour. That gives me ten hours of Buffer posts. Then, I use Hootsuite to manually schedule all of the awesome posts I find from around the blogging world. I found the posts and wrote the tweets in Evernote, so now I just have to copy the tweet into the Hootsuite scheduler and set the time for the top of the hour. So I’m still sharing content every half an hour, I’ve just split up how I share it. I know it may seem like “Lauren, why would you manually do that? Like girl?”. Because I can batch upload those to Hootsuite for days at a time, so then all I have to do is refill my Buffer queue at 1:30pm and 10:00pm-ish {and then set it up to start the new day} and that’s it. I batch upload Hootsuite and then just have to worry about Buffer.

Pinterest, on the other hand, was more on par with last month. I had 74,560 impressions on my pins and 37,770 viewers. That is about roughly the same as it was last month. I ended the month with 696 followers, which is an increase of 43 followers. Like I mentioned last month after I posted my traffic report I actually had lost some followers. I check my followers at midnight on the first of the new month, since I’m usually awake, and that is the number that I go by, so it was weird seeing a decrease after the first of the month. It is also something that hadn’t happened before last month.Regardless, I’ve been trying to pin more, but with my vacation and whatnot, I didn’t really find myself opening Pinterest all that much. I have joined some new group boards so I’m hoping to get more exposure through those.

Instagram has been interesting this month. When on vacation, I was able to change my account to a business account and I thought that was interesting. I don’t really know if I’m going to share the analytics because they are so basic, and don’t really show much, to be honest. They show me my posts in order of most impressions/engagements/likes/comments/some other factors. My impressions total over the past seven days, and when my followers are active {I think over the last seven days}. They don’t provide much flexibility with the timeframe of the analytics so I’m kind of meh about it. Regardless, I ended the month with 176 Instagram followers, which is an increase of 26 followers. My Instagram followers fluctuate A LOT over the course of a month; probably because I’m so inconsistent with posting. I’m definitely trying to get better with that. We’ll see how August goes!

I hope you have enjoyed this month’s blog traffic report! If you have any tips or tricks, let me know in the comments!

Hey there! It’s already the beginning of October and that means that it’s time for another blog traffic report! Every…

First off, I want to say that I’m all signed off on my training and am officially a gate agent!…

Last week, I unboxed my very first BOXYCHARM box and it included a beautiful nude nail lacquer! {You can watch…

As you know, I do have a YouTube channel and many YouTubers watch others; myself included. I love watching other…