Hey there! Today I wanted to share something pretty special! Earlier this month was my two year anniversary at my “day” job (unfortunately I do have a job besides this awesome space). The past two years have felt like they’ve flown by but also it’s felt like I’ve worked at this job for way more than two years. 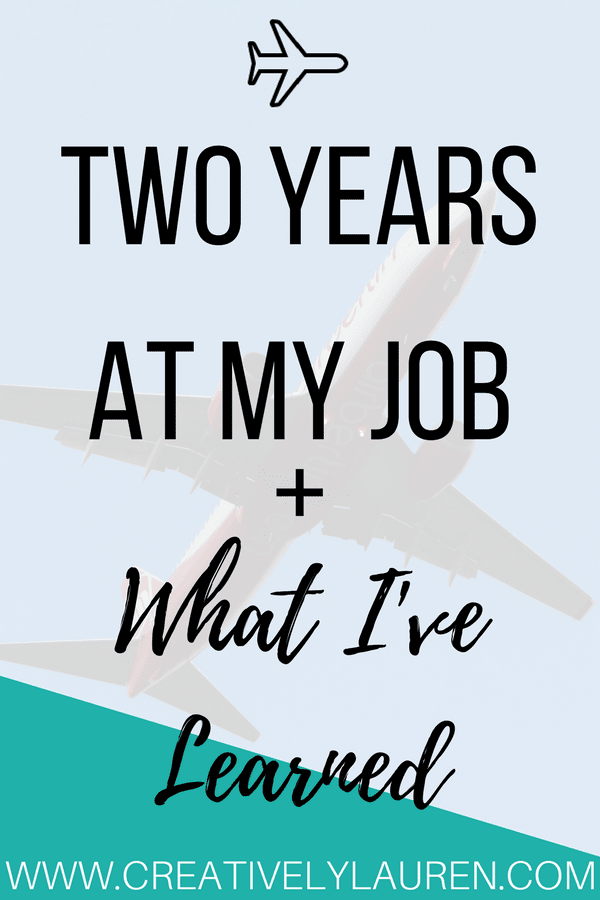 So, two years ago I started my training for this job. I went through three weeks of classroom training, three weeks of on the job, and one week of cutover training. The cutover training wasn’t originally scheduled to be right after my initial training, but I’m glad it was. I definitely believe in the long run, that worked to my advantage. Over the past two years, I’ve learned a lot about me as well as the general public and working with them. Now, I know this can be touchy, but considering I was very shy and didn’t have as much control or even knowledge about my own anxiety, I was shocked.

Do not take things personally.

I learned this pretty quickly, most people are not talking about you personally when they say “this is your fault”. When you’re an anxious 19-year-old however, you definitely do take it personally.

The general public looks at the service industry, and especially customer service, as almost less than. I’m sure most don’t look at it this way. Yes, this is my job I get it, I get paid to get yelled at (not enough I might add). However, there are people who just scream their heads away, cursing at you, basically forgetting that you are a fellow human being with feelings. But just because this is my job does not mean you get to act like an a-hole.

To not be “that person”

You know how I just mentioned that people suck and basically forget that the people they’re screaming at for five minutes are also human beings? Ever since I started this job, I do my best not to be that way to others in the service industry. I’ve walked a mile in their shoes. I know what it’s like to be berated for something that is completely out of your control. I try to take that into consideration now.

To stand up for myself

In the beginning, I was pretty much a say yes to whatever people pleaser. I was not about the confrontation and would just back off. Well, two years later, I have no problem standing up for myself against other people in this industry. I have had confrontations with pilots and others. It’s never my intention to be mean or rude, but I will not be pushed around, let people treat me like I’m a child because I’m young, or play games with the operation.

To take care of myself

This past December was pretty rough for me. I basically did not say no to anything and ran myself straight into the ground. It sucked, it really did. I became very depressed and extremely exhausted. I was not taking care of myself. Something clicked after that and I’m a very big advocate now of taking care of numero uno. I love this job but I need to love me too.

I do love this job

People always ask me “how do you like it?” or “Do you like your job?”. My overall answer is yes! It has its bad days no doubt, and when they’re bad they are bad, but they’re not all bad. Every day is a new day, you clock out of the bad ones eventually and start over fresh the next one. When I look back over the past two years I’ve had amazing experiences here, I’ve met so many awesome people and made great friends here. Whether they are my gate coworkers or the crews that fly through Phoenix, they are great people. We are a very family-like station, something that is very rare apparently. Most stations are not like that but I’m glad ours is.

I’ve been afforded opportunities within the company because of how good of an agent I am. I’ve also been able to jump on a plane and go anywhere, whenever. Two family emergencies and both times I’ve been able to hop on a plane the same day and go where I needed to go. That is not possible at every job. So when people ask if I love my job, I do. I love it a lot.

I’m so thankful for what I’ve learned over the past two yeara!

I love Her Campus, Arizona State, and writing! So recently, I decided to apply for Her Campus ASU and now…

TGIF! *This post contains affiliate/referral links It’s Friday and I am very thankful for that. Here are some of my…

Last week, I did my first of this little series “Fall Into Fashion”, it was on tops! This week it’s… Hey there! I’m starting a Bullet Journal Supplies series on my blog. I know that you don’t need anything too…

Happy Friday! I haven’t done a Friday Favorites post in awhile! However, recently I have been seeing slews of gift…

Happy Friday! I’m so glad this week is over, well for school it is. It never is too bad though…