Hey there! Today I wanted to share my October 2018 Blog Traffic Report. I did pretty well with consistent posting this month, which I am proud of. My traffic was pretty good this month, it kind of plateaued this month, compared to the last couple of months. I’m hoping traffic will pick back up in November, due to holiday posts coming out.

Every month I share my traffic stats to show what my numbers are, how I use social media to drive traffic to my blog and to share that it’s okay to have lower numbers. Many traffic reports show these big numbers and make newer bloggers feel disappointed about their numbers. Remember, it’s not always about the numbers. You can have lower numbers but a tight-knit community. Stop comparing, and do you! 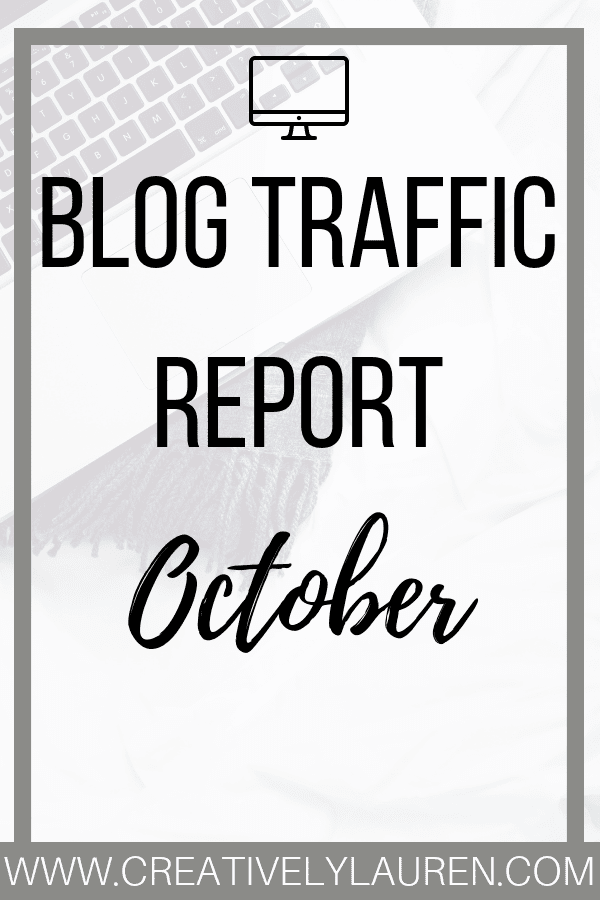 This month I had 1,727 users and 1,839 sessions that resulted in 2,312 pageviews. This month was better than last month, but still not where I wanted to be. By the middle of the month my traffic kind of stagnated.

I still am using Google Calendar and IFTTT to schedule my tweets for me, but I tried to be more active myself on Twitter. I participated in a Twitter chat which helped me remember that blogging is a community and we all grow with help from each other.

I also ended the month with an average of 105,928 monthly viewers and 4,780 average monthly engaged users. That is a decrease from last month.

This is from me manually pinning my pins when I could and then Pinterest just doing the rest. Now, I have to admit, there were some days that I didn’t pin at all, but I’m trying to be better about it.

I am going to skip an Etsy update this month. I haven’t really been keeping up with the shop. I’ve been getting item favorites, but I didn’t get any sales this month. I think I’m going to just let all of the active listings run out and then just let it sit empty until I figure out if I want to keep it up.

I hope you enjoyed this month’s traffic report! Do you have a traffic post you want to share? Let me know in the comments!

When I was doing my nightly ab workouts, I had checked my email in between exercises and saw that Mikkaela… Hey there! Today I want to talk about one of my favorite platforms, Pinterest! Pinterest is so important to blogging… Hey there! It’s November and that means that it’s time to share my October traffic numbers! I know I have…

Hey friends! I wanted to talk about something that was brought to my attention by a fellow blogger that I…

I can’t believe it’s already been four months since I’ve started this blog! I feel like it’s come a long…